How beautiful and pleasant it is to drive into a clean and well maintained park! 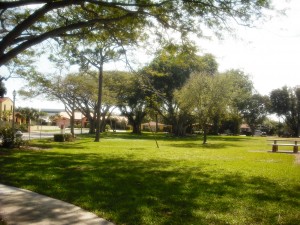 It does not matter how small or large an area, if it is free of trash, right there, it’s a plus. Your eyes look around and you have a calmness coming over you. However, if you spot just one single item that does not belong, all of a sudden, you’re annoyed. 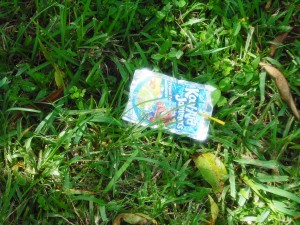 At least, that’s the way I feel when something is left out on the grass instead of its proper container. And I’m not the type of person that has to have everything super clean at home either. Although I admit I’ll spot something before most others in our household.  So why is it that some people leave trash around? Well, the way I see it, there’s four types of people out there. The first kind are those who do it almost purposefully, out of sheer spitefulness, even if they know better. The second type who think nothing of leaving something, whether it’s a piece of paper, a bottle, cigarette butt or whatever else. They just don’t care. It’s as if they say to themselves, nobody sees me, it doesn’t matter then. Or could it be laziness! Just too far to walk to the trash bin! The thought of “it’s just a small item”, nobody will notice that!”  Then, there’s the third type, who picks up after themselves and will dispose of trash properly, but will not go out of their way to do something extra because, in their minds, they’re not responsible for other people’s mess which is true. Then, there’s the fourth kind of people, who will always dispose properly and even go out of their way to keep things clean.

I’ll admit that even myself at times did not go out of my way to pick up something that was left. We all get tired and we do not come to the park to work but to relax or play or have fun. And there are people who are paid to keep our parks clean. 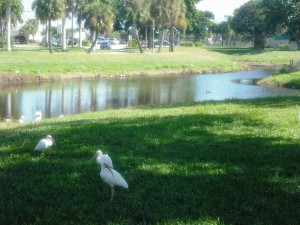 Many times but not always, this is the result of the way we were brought up.  Our parents instill in us good habits, strong work ethics and responsibility or they can instill other traits and behaviors which are negative toward our environment. Not really thinking too much about the future consequences, their habits are passed on to the next generation. And we all know it’s very hard to break bad habits.

Generally, people love to have clean surroundings, pleasant living conditions, organized and structured lives and there’s evidence that it’s a boost to mental clarity as well.   Also notice that animals much prefer a clean environment. So what’s the problem then and what do we do about it? How do we make people care, how do we help them to see that it does matter, how do we convince them that it’s better to go ahead and dump that can in the trash bin instead of leaving it on the ground. How do we help them to understand that it starts with a thought. To be mindful of your surroundings, to be considerate of the next person, to leave the place as good or better than before you came. Everything we do starts with a thought, every action we take whether consciously or not has its roots in our thoughts.

You could say, some people do not know any better! But is that really so? What would it take to get them to know better?  At what point does it become apparent to them that cleaning up behind themselves is something worthwhile. Even if nobody thanks you for doing it, and if there isn’t a soul watching you, you do it anyway because it’s the right thing to do! 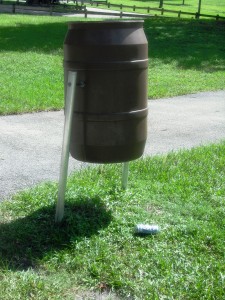 Most parks now have recycling bins usually found near the regular trash bins.  Today schools always encourage children to be good steward of our resources and are taught to recycle at home and everywhere they can.