The Florida state marine mammal is the Manatee.

The manatee, also called a sea cow, is a gray, waterplant-eating, gentle giant that reaches eight to fourteen feet in length and can weigh more than a ton. 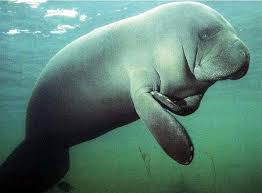 It was designated the state marine mammal in 1975.

Manatees are on the endangered species list, but chances for their survival are good if humans’ activities can be controlled. Of all the known causes of manatee fatalities, humans are responsible for about half of the deaths. The most-common cause of death for manatees is being struck by boats and barges. Also, the propeller blades of speeding boats can cut a manatee’s hide to ribbons. The Florida Manatee Sanctuary Act of 1978 and later regulations have limited the speed of boats in waters populated by manatees during winter months, when more than 1,500 of the creatures swim to warm bays and rivers to avoid pneumonia and death.