Coral is the outside skeleton of tiny ocean animals called polyps, which live in colonies attached to hard underwater surfaces. When alive, polyps combine their own carbon dioxide with the lime in warm seawater to form a limestone-like hard surface, or coral. 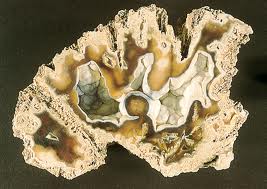 silica in the ocean water hardens, replacing the limy corals with a form of quartz known as chalcedony. This long process (20-30 million years) results in the formation of a “pseudomorph,” meaning that one mineral has replaced another without having lost its original form.

Chalcedony is a micro crystalline (fine crystals visible only under a micro scope) Quartz that includes stones like Jaspers, Agates, Onyx, Petrified Wood and Flint. Agatized Coral is one of the hundreds of cousins in this massive gemstone family. Agatized coral is found in three main Florida locations: Tampa Bay, the Econfina River, and the Withlacoochee/Suwannee river beds.

In 1979 agatized coral was designated the official state stone